10 things you can't miss in Amsterdam

First of all, I would like to firmly condemn the terrorist attacks that took place in Paris, two weeks ago but not only in Paris also in Beirut (Lebanon) or Nigeria not that long ago. The truth is that regardless of where you are, there aren't 100% safe places anymore, terrorism has created a sense of fear and insecurity everywhere and people are increasingly ready to give up their fundamental freedoms in order to get more protections from the police and national authorities. This dangerous trend can't be tolerated as it's a key goal in the terrorist agenda, our "way of life" can't be altered neither changed in any single way and the inclusive and tolerant attitude towards other cultures must prevail in Europe. The values of democracy, tolerance and openness are deeply enrooted in European history and they will stand against terror. Having said that, there is a strong need to investigate the islamic fundamentalism from the basis, the preachers spreading messages of hatred must be detected from the very beginning and the dangerous networks existing in the Net are also a big source of terrorism recruitment. 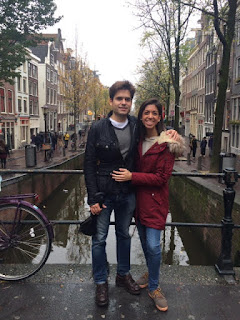 After visiting the capital of the Netherlands, I can honestly say that three times are not enough to fully enjoy what this faboulous city can offer. For a long time Amsterdam has been the symbol of drugs non restricted use, prostitution, hangovers and rocking parties. For all those reasons, it has attracted tourists from all over the World willing to escape from the "boring" reality of their home country and do everything they are not allowed to do in their home places. Thanks to this reputation, Amsterdam may seem to be a sort of long-standing paradise for "Carpe Diem" lovers not worrying for anything other than having fun. However, Amsterdam is far more than that, it has many museums (Van Goth, Rijks, Anne Frank house) parks, restaurants and cultural events that are even more worth visiting than all the other touristic attractions.  In this post i will just mention a few of those "alternative" spots. 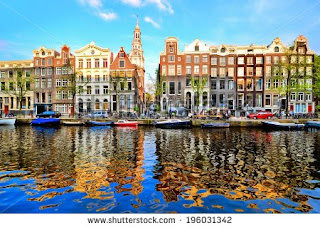 As part of the first visit to a city, there is always someone telling you should do a tour to have a broad idea of what are the main things you can visit in the city. To be honest, in Amsterdam, it's not just one but  thousands of them, so you can easily feel overwhelmed by so many offers. However,there is one special tour; you should definitely try this free local tour. In my case, I did my tour with Tim, an authentic Dutchman that knew every single hidden spot of the city. In a fantastic 2 hours tour, mixed up with Americans, Canadians, and Israelis among other nationalities, this tour was full of anecdotes and I learned many things i didn't know before. For example, I discovered how the Netherlands was ruled by Napoleon's brother; Ludovic, and the complex system through which coffee shops make profits.

Since I went to Amsterdam for the first time, I had been looking forward to try tone of those bikes. When I asked for a bike, they made the difference between regular bikes and "dutch" bikes. As you may have noticed, bikes in Amsterdam are just like cars in any other place, so don't even intend to have a priority over bikers, you will lose the battle for sure! The secret of Dutch bikes is quite easy to find out: they don't have brakes so if you take them it's at your own risk. 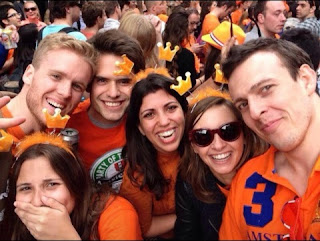 If there  is an important date you need to remember before going to Amsterdam, it's the King's day. I guess, it's one of the best parties I have ever been to and no matter how old you are, both parents and kids do have fun together, bear in mind to wear something orange. This national celebration started long ago and it was named as the "Queen's day”. Those royal celebrations were held for the first time in 1885 in honor of the birth of Queen Wilhelmina, and since that the celebration was born. The date was later changed to April in 1948 since it was the birthday of the new Queen Juliana. In 2013, with the arrival of a new King Willen-Alexander, the day officially became the King's Day. 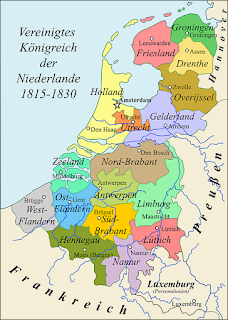 4. Understand that Holland is not a Country but a province:

Despite, everybody calls the Netherlands "Holland", it is just one of the historical 17 provinces of the United provinces. Those provinces, just before  the independence of Belgium in 1830, had a strong autonomy and not a big sense of patriotism. That changed in the 19th century, after the French invasion, creating a new sense of common identity that prevails until nowadays deeply connected to Protestantism.

5. Discover the fantastic street musicians all through the city:

Amsterdam is just the perfect a place to listen to a street concert made  by world-class musicians without worrying about the copyright. The opportunity to hang around those narrow streets and stopping every 30 minutes to listen to talented bands playing the guitar or any other instrument is something unique.

As every football fan may know, the "Klassieker" is how it's called the most important match in the Eredivisie (first division) in the Netherlands played by Ajax-Feyenoord. However, what is not that famous is the historical link between Ajax and the Jewish Comunity in Amsterdam. This city has always been throughout the history a tolerant and integrative city where many religions used to live together in peace and harmony. Famous philosopher Spinoza, was just one of the few Sephardic Jews coming from the Iberic peninsula looking for religious freedom. Unfortunately, the Holocaust put an end to more than 70.000 Jews including the tragic end of Anna Frank.

7. No matter where you go, there are no mountains in this place:

It's actually quite funny, but the name of the country in duch:"Neder-Land" just means Low Lands so there is no confusion on this. In fact, most of the country is below the sea level, and their survival is due to the incredible engineers that developed the "Polders" many years ago allowing to drain all the water and to keep cities away from massive floods. Nevertheless, the Netherlands is still one of the most threatened countries by Global Warming in the World.

8. Many of the World Top Companies are from the Netherlands:

Many people tend to associate the USA, China or even the UK with the most powerful firms worldwide, but some Dutch companies are still are still on the top. This seem to be an incredible performance for a country with less than 20 Million inhabitants but the Dutch have been always been merchant people and their influence is still visible in the World. Companies like Heineken (you should visit the factory), Royal Dutch Shell or Phillips are some of the most well-known.

9. The Dutch also had their Empire:

Even though, their colonies didn't last for long, the Dutch were present in every single place of this planet. From New York (former New Amsterdam), to Cape Town, Indonesia or even New Zealand (Zealand is a Dutch province), the Dutch West Indies Company became one of the most powerful in the World and when this corporation collapsed due to the commercial sanctions, the whole country felt in bankrupt. Today the only remaining territories are the Netherlands Antilles (Bonaire, Curaçao, and St. Marteen).

10. Don’t even try to learn Dutch, they will answer you in English:

Along with the Swedes, the Dutch are the guys that speak the best english outside from the UK (And we could even argue about that ;)) Their language is a sort a mixture in between German and English and since all their movies have subtitles they learn English at a proficient level from a really early age. As I love language challenges, i started learning Dutch on my own and now I'm proud to say I can practice it on a daily basis with some dutch friends willing to learn Spanish. Some basic words are:"Mooie"(Beautiful), "Lekker" (Really basic word),"Fiets" (Bycicles) or “Dank u veel"(Thanks a lot).

That's some of the funny moments I can tell you about my Dutch experience, what about you?

Popular posts from this blog

Since I landed in Morocco , one of the first things they told me was "if you want to see something different, you must visit the south". I was reluctant at the beginning since I didn't know anybody that had been in the South before that could give me some feedback about it. Of course, most of the people visiting Morocco stay in the north which remains more familiar or rather go to the desert to have the typical postcard picture to brag about among your friends. However, I had been looking forward to go  on a Road trip for a long time, a trip  without any schedule or attachment, only focused exploring something different and discovering the wild beauty of the South.
Read more