8 Things you can only see in Casablanca

If you are searching on the internet for the ten most beaufiful cities in the World, you will definitely not see Casablaca on the list. Neither you will see it on the places you can't miss before turning 30, not even on the top places you must see at least once in your life in Africa. However, it still has some "charm" in a particular way. Beauty is not only at first glance, sometimes you need to explore and know further in order to recognize the attractiveness of certain places. It's only after being there for a while that you realize the place is not that bad despite its bad promotion.

That's the case of Casablanca which is globally known for two basic reasons. The first, above all, is the movie Casablanca, this legendary movie with some of the most memorable quotes in Cinema History, placed that city on the map, and without any doubt even fewer tourists would come, hadn't that movie been named after the city. Not willing to make any sort of Spoiler, any likeness between the real Casablanca and the city you see on the movie is just  a pure coincidence. The other reason, far away, is probably the big Mosque Hassan II, which, to be honest, I didn't even think of visiting before coming here.


Besides that, Casa, as locals call is just the economical capital of Morocco, the place where everybody wants to work but nobody wants to live. Its bad reputation is not for nothing: horrific trafic jams, dirty streets, people shouting everywhere, air pollution, and the particular character of "bidawis", a curious combination of chilliness and arrogance, that makes them extremelly unpopular anywhere in Morocco. Nonetheless as any other major capital, everybody leaves the city whenever they have the chance to come back to their original town, you particularly notice that during big religious parties like  Aid -Al-Adha (Fète du Mouton). among the berber community.

But not everyhting is that negative, after nearly one year here, I could still recommend some things you can only see in Casablanca:

1) Streets is Casablanca have 2 names: 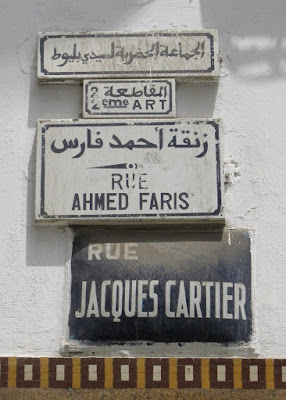 After independence, the "arabisation" policy led authorities to change the name of many streets, in order to change the name of the former colonial power names into more local ones. That seems pretty logical, however in Morocco everything is done on its own path "chwia b chwia" so 50 years after independence, streets haven't been changed or at least not totally. That creates a very rare phenomenon of streets having two names, just an example what everybody knows as Rue Galilée is actually Rue Taha Housine. So just a tip, keep in mind famous places near the hotel you are staying because not even taxi drivers know the names of many streets.

2)  In Casablanca is safer to go by car that walking: 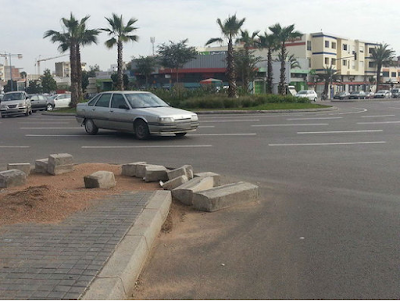 I am not saying that in Casablanca is safer to go by car, just the opposite indeed and you must be really on a "zen" mood if you don't want to be involved in any sort of battle in the middle of the road which in most cases end up after a 5 minutes useless argument while a long queue of cars waits while claxonning like a vibrant orchestra. However, going by walk is even worse. It's the unique experience of being in a roller coaster, the pavement goes up and down so you must litereally mind your gap if you don't want to fall into an improvised hole or twist your ankle with a sudden hill.

3) Nobody knows how many people live in Casablanca: 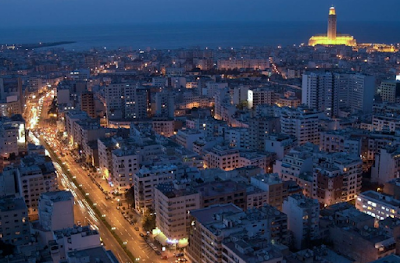 In the year 2016, while the technology apps are nearly everywhere monitorizing every single activity you do during the day, some basic figures are still out of control. That's the case of Casablanca population. The official data says, there are only 3,6 Millions people living here. Like a friend of mine once told me, experts must be wrong as everywhere you go, there are crowds on the street. Then locals like to broaden the number saying that is certainly more than 4 and probably less than 8. As moroccans don't like to say "yes" or "no", Casablanca real population is still a big mistery.

4) The football derby is played in Agadir: 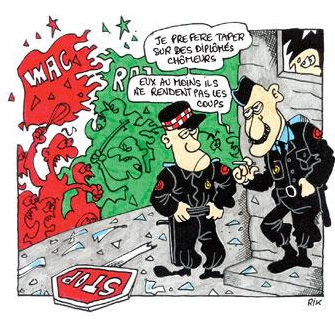 That must be a practical joke don't you think? I mean could you ever imagine that the most important game in the season played by the two big rivals within the same city is played 600 kms away. That would be insane anywhere else however in Morocco it does make sense. The tension between Raja and Wydad Casablanca goes far beyond any sport event and violence is always present. I remember it was the first thing they told me when I first came, always stay at home when Raja is playing. I thought it was quite extreme but changed my mind after watching a group of fans stealing and breaking everything in a bar nearby. Right now, the new stadium is under construction, that's why they play in Agadir.

5) Casablanca has some of the best Art-Deco Buildings Worldwide; 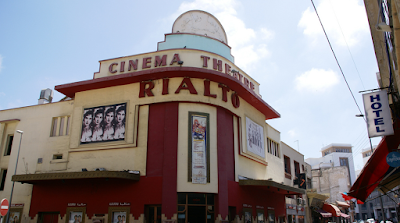 Not everyhting can be negative and despite the lack of maintenance, Casablanca does have a wonderful Art-Deco Heritage. I had the opportunity to visit of those historical buildings designed during the 1930 when the city became a sort of experimental laboratory for some of the most famous french architects. During "Journées du Patrimoines", a day organized by Association Casa Patrimoine,  the volunteer guides of Casa Memoire organize tours arround some of those buildings like the Bank of Maghrib, Wilaya, among others.

6) Casablanca is the only city hosting a jewish museum in the whole Arab World: 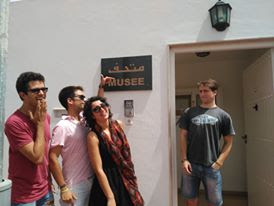 Casablanca has always been a melting pot of different cultures: europeans, sub-saharan Africans and arabs do live together in that city. However what many people don't know is the importance of Jews in the history of the city. Just before independence in 1955, there were more than 200.000 jews living in Morocco, many of whom used to live in Casablanca as merchants, shop owners or just business men. They were very involved and had even their own quarters like Maarif and own shops for Koscher food. Even though, many  of them went to Israel, there is still a big community of jewish and they even have their own museum, the only one in Casablanca by the way.

7) Casablanca suffered one of the most terrible terrorist attacks in the 21st century: 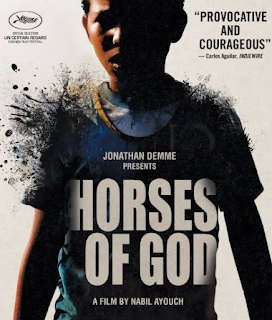 Through West Media we mainly know about the big attacks on Paris, London, Madrid or Brussels, Casablanca suffered a terrific attack right after the 9/11 attacks in 2013. The attacks were commited against spanish consulate, a spanish restaurant and killed more than 40 people. The suicide bombers came from the very poor suburbs like Sidi Moumen ( You should watch the movie Horses of God which explain the phenomenom really well)  and afterwards, a very strict campaing was launched capturing many of the people involved and starting a big movement to prevent radicalisation by spreading a moderate vision of Islam arround the country.

8) It's not Hawai but still a nice surfing Spot: 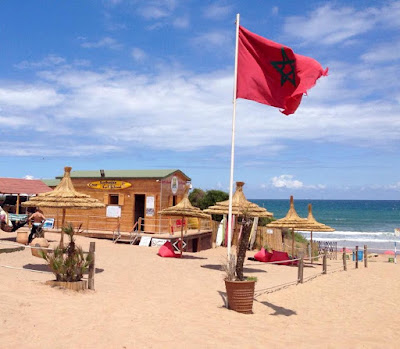 I'm not a big fan of this sport but I gave it a try as I could have never imagined the surfing culture in Morocco which is very alive specially in the South. Casablanca beaches are not that good but remain much better than most of the urban beaches I have seen so far. After crossing the fancy "Corniche" full of very nice bars, cozy restaurants  and clubs to chill out (Cabestan, Maisson B or BAO among others), you arrive to the beach Ain Diab which has many sport clubs where you can practice surf. The atmosphere is really relaxing and the water is clean so what else can you expect. Besides this year the Quick Silver pro Casablanca part of the World Surf League tour took place in Casablanca gathering some of the best surfers Worldwidde.


I'm not sure if all those reasons convinced you to visit Casa, however if you have the chance don't miss it and you will discover a very accurate portrait of  the diversity of Morocco mixing modernity and tradition. In my case I can only say thank you for this year and as Humfrey Bogart said in the famous movie: " We will always have Casablanca" inshallah.

Popular posts from this blog

Since I landed in Morocco , one of the first things they told me was "if you want to see something different, you must visit the south". I was reluctant at the beginning since I didn't know anybody that had been in the South before that could give me some feedback about it. Of course, most of the people visiting Morocco stay in the north which remains more familiar or rather go to the desert to have the typical postcard picture to brag about among your friends. However, I had been looking forward to go  on a Road trip for a long time, a trip  without any schedule or attachment, only focused exploring something different and discovering the wild beauty of the South.
Read more